“This is not the river
it’s an explanation of the river
that replaced the river.” 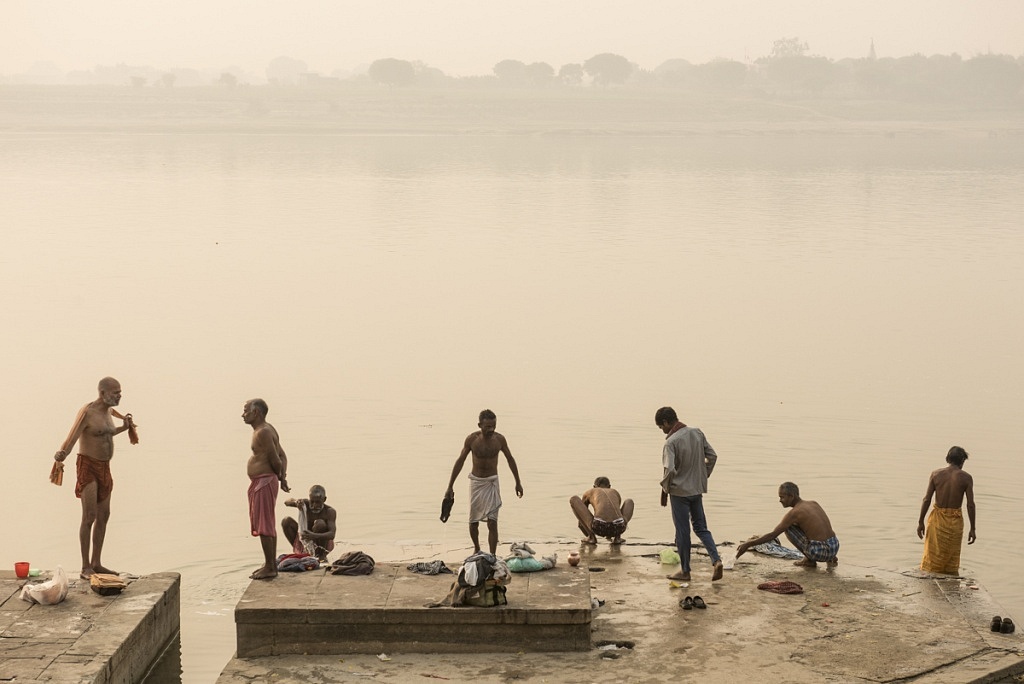 Dashashwamedh Ghat Road (and it’s not easy for me to say either) is an unrelenting stream of humanity flowing down to the Ganges. Just after the incongruous tower of St. Thomas’s Anglican church, sitting in the middle of this chaos as though it has somehow been miraculously teleported from a small English town, and randomly plonked down in India, all motor traffic is banned. All day long, coaches disgorge pods of pale tourists that join the pedestrian mele like icebergs floating out to sea. Anxious faces try hard not to lose their guide, terrified that they may be uncontrollably swept away to the great unknown. 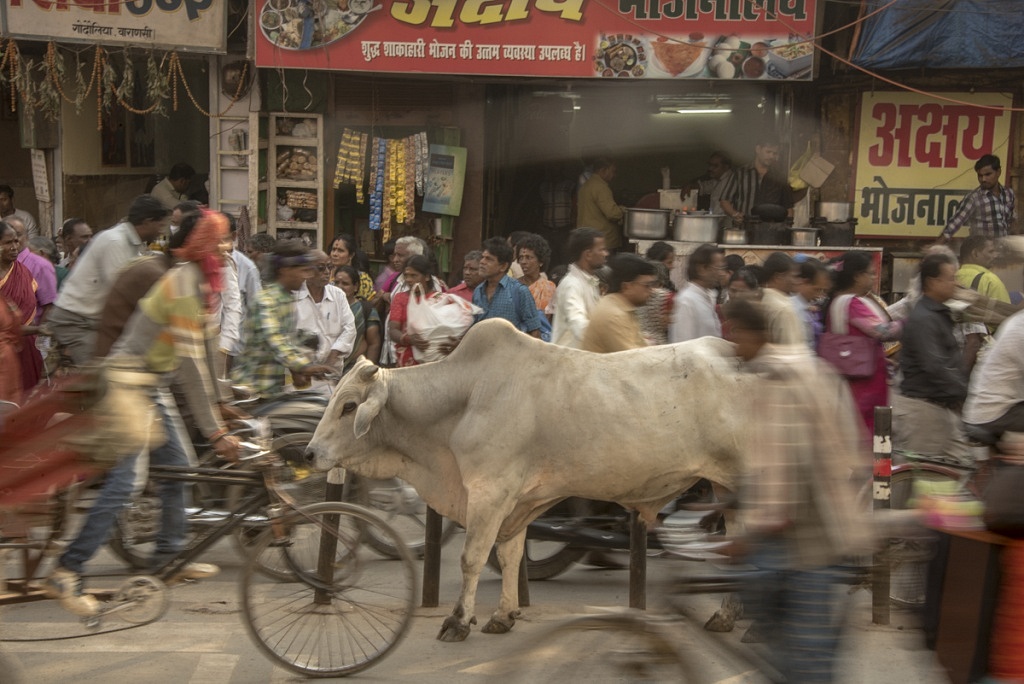 After negotiating bicycles, rickshaws, goats, hawkers, touts, cows and all manner of less savory obstacles deposited in the street – this is not a place to wear open sandals, – they reach the ghats, flights of steps leading down to the Ganges. Here, they pile onto small boats for a quick row to the middle of the river, venture down to the cremation ghat to satisfy those with a morbid curiosity, back to dry land and back to the bus. This is their Varanasi.

Many swear that they will never, ever return to this “filthy hellhole of a city”. 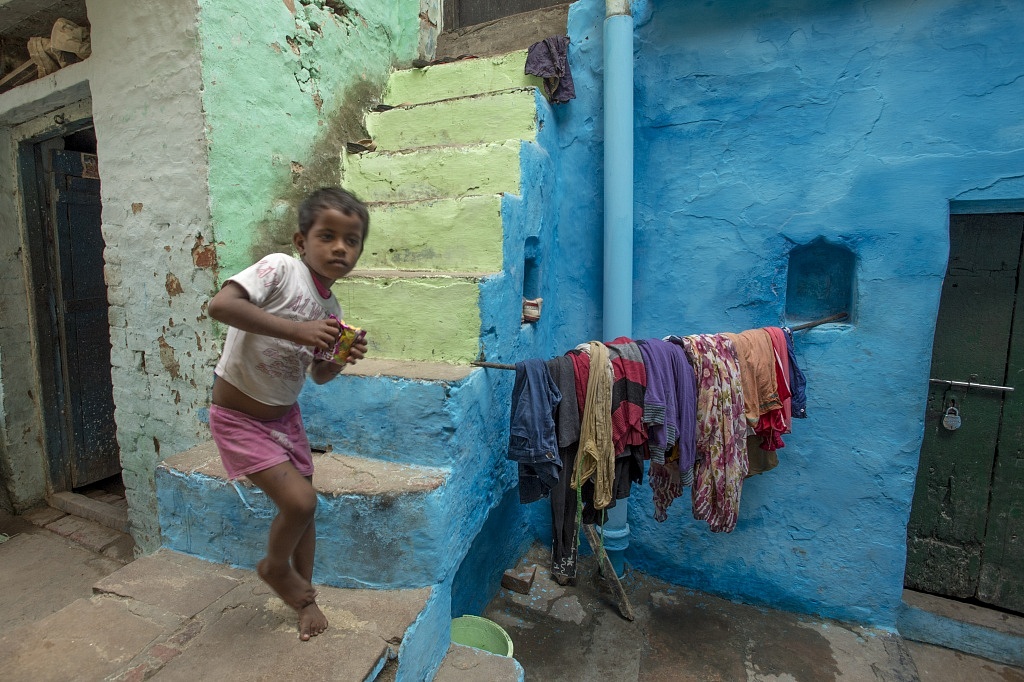 Any city that’s been continually inhabited for at least 5,000 years can be expected to be a little worn at the edges, in serious need of repair. But it’s this ancient patina that gives the city its character. This and the ever-present atmosphere of religious devotion. After all, this is India’s spiritual capital, so sacred that to die here is said to release the body from the endless cycle of rebirth.

Funeral pyres burn 24-hours a day at Manikarnika Ghat and boatloads of wood supply the continuous need for fuel.  The head mourner, usually the eldest son, dressed in white, has his head shaved leaving a single tuft at the back.

Enough banyan wood for the cremation of one body costs about $10 but the wealthy chose expensive sandalwood.  The wood is carefully weighed to ensure that none goes to waste.

The narrow streets behind Manikarnika ghat are home to the “untouchable” families who have tended the cremation grounds for centuries. 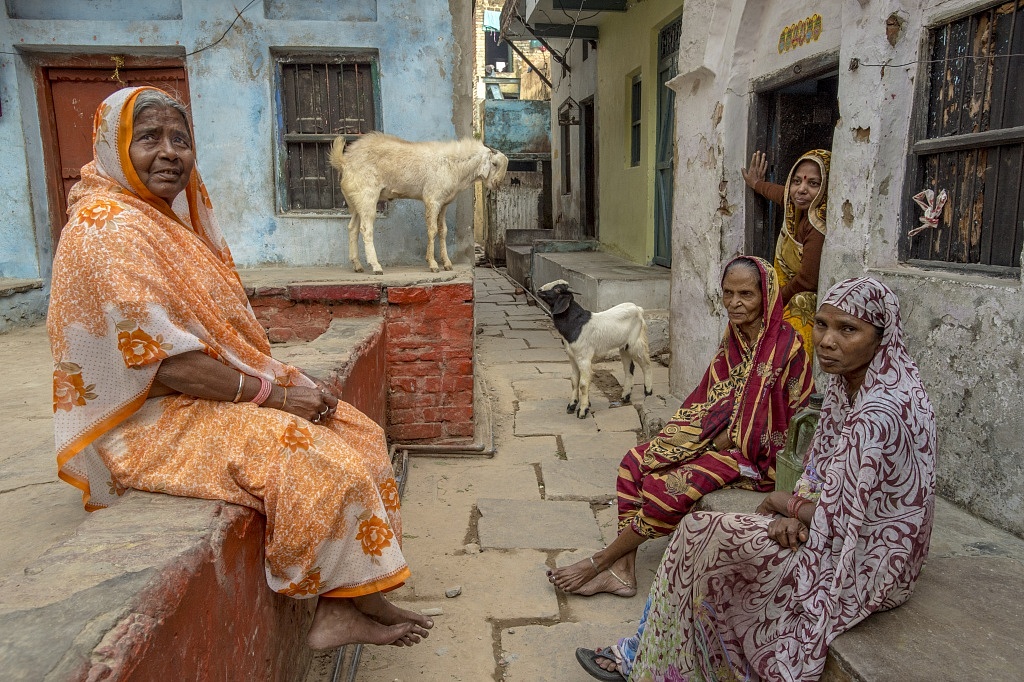 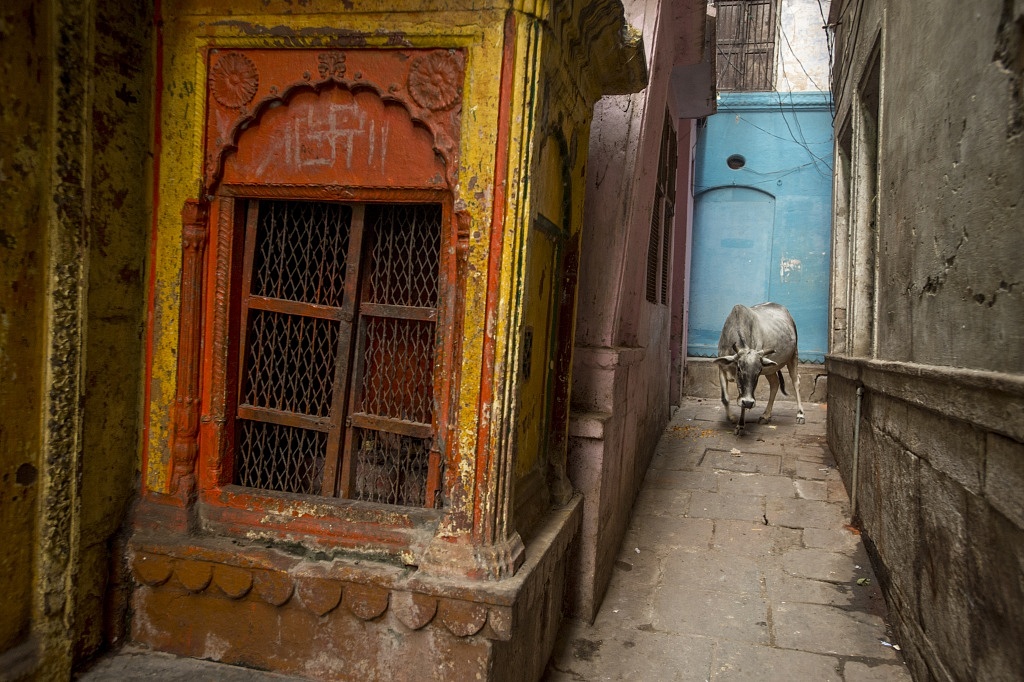 Varanasi is so much more than the short length of ghats experienced by most visitors.  It is certainly overwhelming but once away from the chaos of the main thoroughfare a maze of narrow alleyways reveals a world unchanged for centuries and all paths lead to the river.

Along the way, Kushti wrestlers work out in an Akahra,

shops filled with garlands of marigolds and exotic flowers for devotees to offer for blessings to the Ganges and it is the Ganges that is not only the spiritual heart of the city but the center of daily life.  The river is both the bathhouse and the laundry. 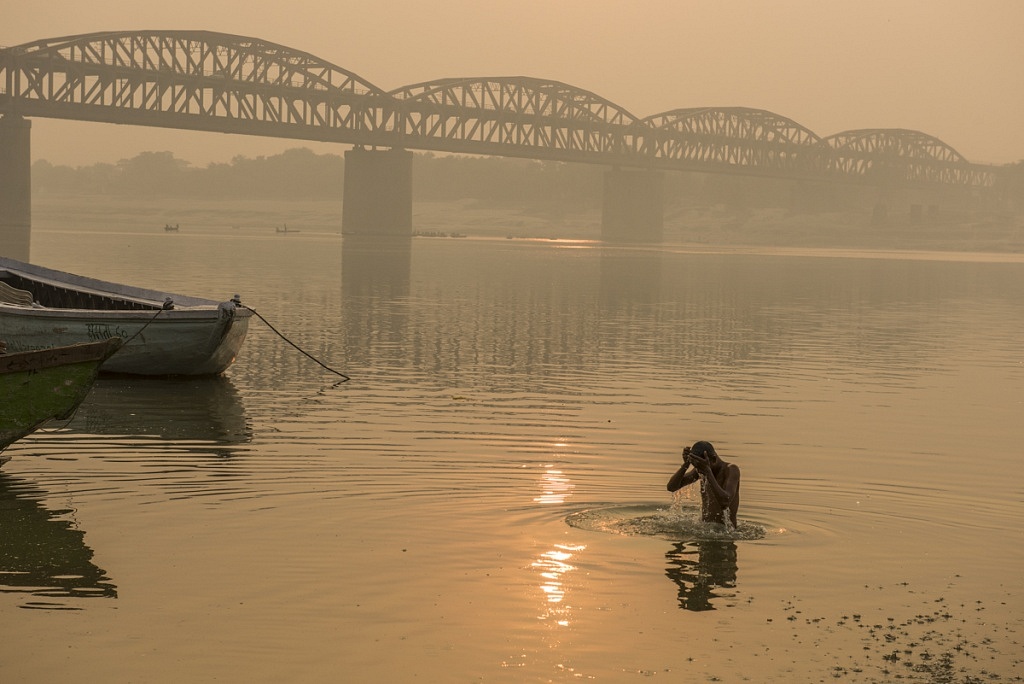 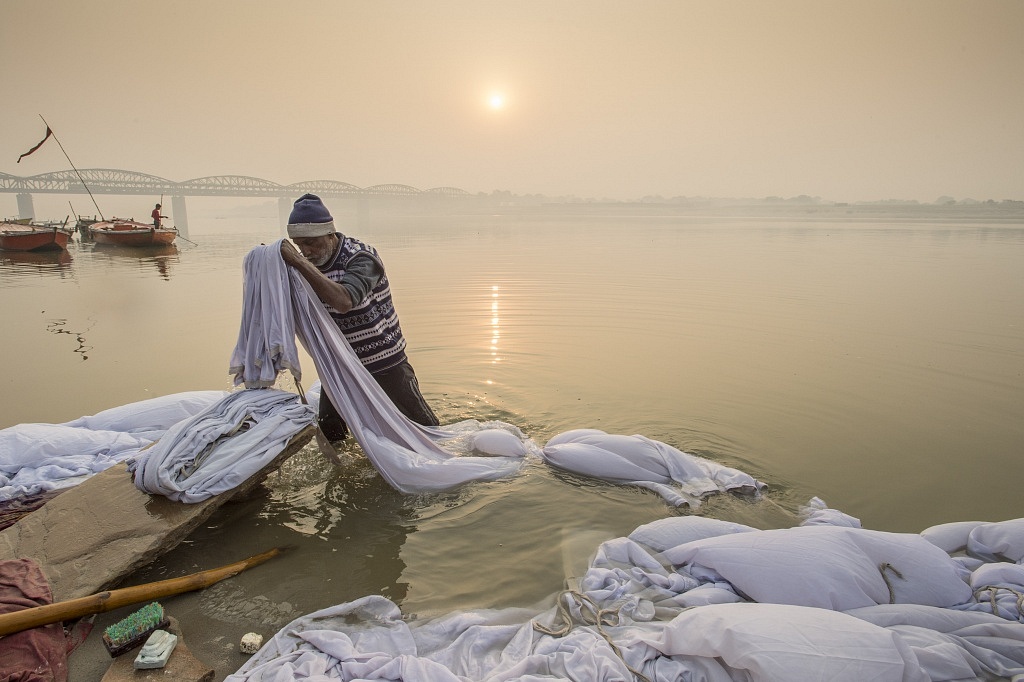 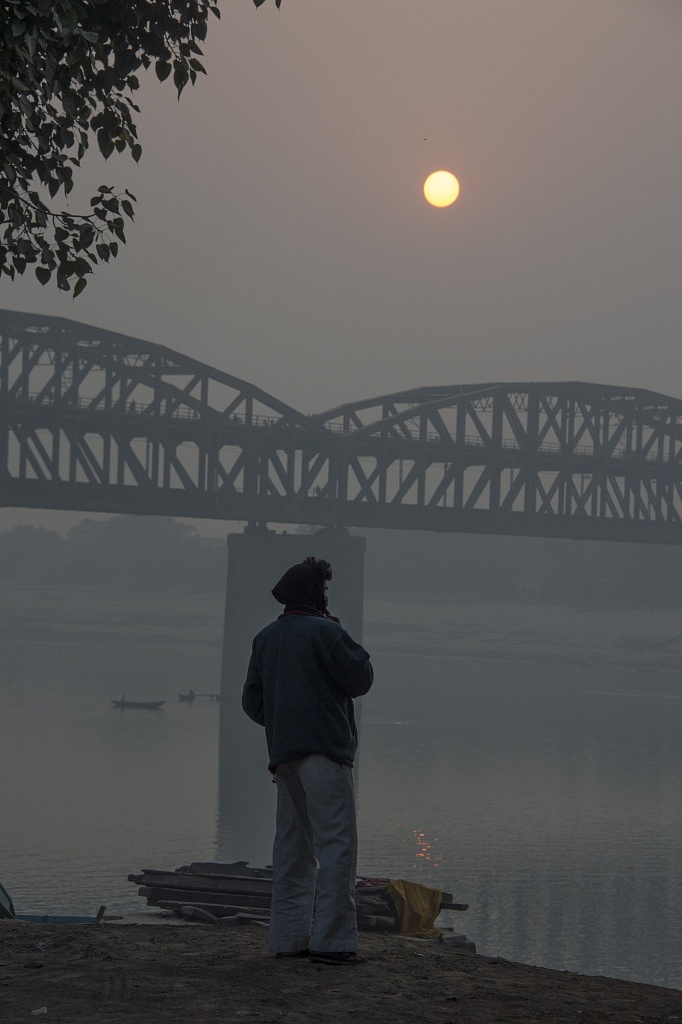 Every morning at sunrise, the river is full of activity far away from the stares of tourists. As a photographer, I seek out the authentic, quintessential soul of a place.  I don’t always succeed.  The path to success, however, is opposite that of the tour guides.  Explore, venture into the unknown, don’t be afraid to enter the world of the people who live there.